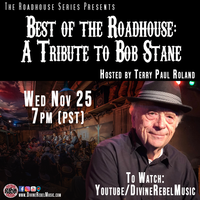 The Best of the Roadhouse: A Tribute to Bob Stane


In the beginning God created the heavens and the earth. And folk music producer icon, Bob Stane provided the venue.

Okay, perhaps that’s a bit of hyperbolic! But, for artists and audiences in the genre of Americana-roots including folk music, singer-songwriters and entertainers over the past 60 years, Bob Stane’s name is familiar as influencer, visionary and constant supporter. Since, as a young man, he took his first steps into an unsuspecting coffee house in San Diego in the late 50s, he has been one of the unsung heroes of the music industry.

Over the last half century, he provided a safe haven by way of a Greenwich Village-style club transported to Pasadena, California (The Ice House) and most recently a vintage Coffee House right out of 1962(The Coffee Gallery Backstage). He has greatly helped the careers of the likes of The Dillards, The Association, Kingston Trio, New Christy Minstrels, Barry McGuire, Bill Mumy, Steve Martin, John Stewart, We Five, Nitty Gritty Dirt Band and Jennifer Warnes among countless others. He also is also key founder of the great musical saga known as The Roadhouse Series, presented monthly at The Coffee Gallery Backstage. He is currently hunkered down in his home in the hills above Pasadena waiting out the virus that’s been sweeping the world.

So, for this month’s virtual online edition of The Roadhouse Series we are paying tribute to Bob Stane with The Best of the Roadhouse. Join us on Wednesday, November 25th with special guests and the regular Roadhouse crew as we celebrate our Mentor, God’s left-hand man and a Friend to all who can carry a tune-and even a few who can’t!